Hubert Cecil Booth, Civil Engineer, was the inventor of the world’s first powered vacuum cleaner to suck up dirt and debris, as do the vacuum cleaners of today.

This suction action would be a lot healthier since the dirt and dust would not simply be blown into the air to land again on furniture and so forth or be breathed in by the occupants of the home.

Enter the world’s first powered vacuum cleaner!
If you were in London around 1901, you would have seen a huge, horse-drawn contraption rumbling along the streets, and not believe that it would eventually end up being the way that people the world over, kept their homes clean. 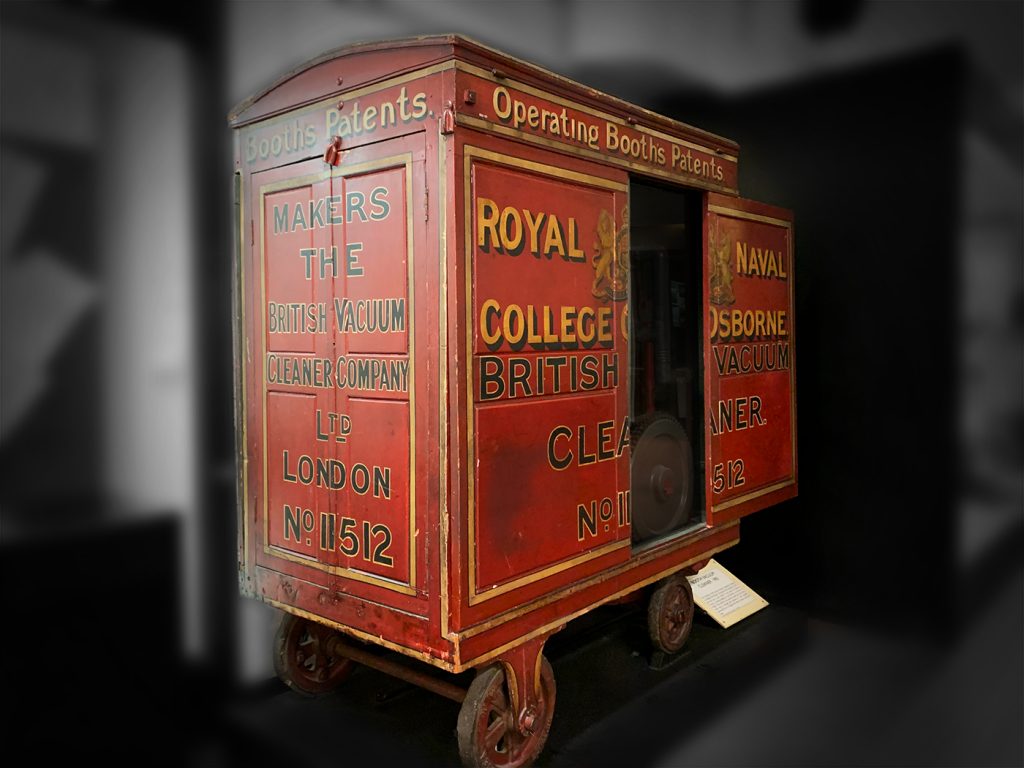 Photography © PHC Vacuum Service, to use this photograph you must credit www.phcvacuumservice.co.uk as the image source.

However, Booth’s vacuum cleaner, nicknamed Puffing Billy, was huge, loud, and even landed him in court for frightening horses and people alike! Besides this, his invention was way too large to be used inside homes. He would park it outside the homes of wealthy people, and long hoses would be pulled through the windows to get rid of the dust and debris inside.

The inventor of the machine that blew dust and debris away, said that there was no way that Booth’s idea of a machine that sucked up dirt could ever work.

Booth accepted this as a challenge and went all out to realise his idea and produce a cleaner that sucked instead of blew!

Vacuum Cleaning becomes a symbol of wealth!
After several court cases regarding the havoc that Puffing Billy caused in the streets of London, Booth eventually persuaded the judge and jury that the machine was the only one that worked at that time.

Being an expensive procedure, Puffing Billy was only affordable to the wealthy, so was used to clean places like the Royal Mint, the Crystal Palace, and even Buckingham Palace.

Puffing Billy became well known as an effective cleaning machine, and models of the world’s first power vacuum cleaner were bought by the wealthiest of the wealthy. These included Kaiser Wilhelm II of Germany, Dickens & Jones department store in London, the House of Commons, and Tzar Nicholas of Russia.

The birth of smaller, portable vacuum cleaners
Even though Puffing Billy created so much drama in London, the same technology and suction theory is still used in most of today’s vacuum cleaners. Machines soon became smaller and more transportable and significantly cheaper, making them more accessible to the public.

Before 1915, famous companies like Electrolux and Hoover started bringing smaller, motor-powered machines onto the market. This eliminated the annual need for wealthier families to move out of their homes for a time so that their cleaning staff could carry out their spring cleaning.

Wealthy homeowners bought new cleaning machines to either be the first to use the new technology or to hang on to their domestic servants who were few and far between during the First World War.

New vacuum machines reach the shores of Britain!
The American company and its domination in the British market triggered the British Association of Vacuum Cleaners to use the word “Hoover.” James Spangler, an asthmatic inventor, succeeded in 1908, in selling his electric cleaner with a broomstick-type handle, cloth filter, and bag for collecting dust, to William Hoover.

Many believe this invention to be the world’s first proper electric household vacuum cleaner.

During the 1930s, Hoover Company had their enormous British factory built-in Perivale, close to Wembley. Smart, streamlined cleaners were produced here, which were extremely attractive to consumers.

However, vacuum-cleaning had not caught on with the masses yet, for two reasons namely, the high purchase price and the fact that not many households had electric power at the time.

This led to most average people still cleaning their curtains, rugs, and carpets using a brush, dustpan, and plenty of elbow grease.

Hand broom and dustpan finally take a back seat to vacuum cleaners!
After WWII, many people still used the old method of getting down on hands and knees and cleaned with dustpan and hand broom.

Then came the 19th century, and the introduction of affordable electric vacuum cleaners, which conjured up lives of leisure for people, and less back-breaking work for their servants. With these new, affordable machines, and the electricity they needed, you would be hard-pressed to find a home that did not own a vacuum cleaner!

In conclusion
With the modern technology of today, vacuum cleaners are way different from those of yesteryear and Hubert Cecil Booth and his Puffing Billy that started it all. Some cleaning machines of today are even robotic and can simply be set and left to do the job on their own!

Call Now Button
We use cookies on our website to give you the most relevant experience by remembering your preferences and repeat visits. By clicking “Accept”, you consent to the use of ALL the cookies.
Cookie settingsACCEPT
Manage consent

This website uses cookies to improve your experience while you navigate through the website. Out of these, the cookies that are categorized as necessary are stored on your browser as they are essential for the working of basic functionalities of the website. We also use third-party cookies that help us analyze and understand how you use this website. These cookies will be stored in your browser only with your consent. You also have the option to opt-out of these cookies. But opting out of some of these cookies may affect your browsing experience.
Necessary Always Enabled

Performance cookies are used to understand and analyze the key performance indexes of the website which helps in delivering a better user experience for the visitors.

Analytical cookies are used to understand how visitors interact with the website. These cookies help provide information on metrics the number of visitors, bounce rate, traffic source, etc.

Advertisement cookies are used to provide visitors with relevant ads and marketing campaigns. These cookies track visitors across websites and collect information to provide customized ads.

Other uncategorized cookies are those that are being analyzed and have not been classified into a category as yet.

SAVE & ACCEPT
Go to Top